Hi all! I’ve recently travelled through parts of Ireland and Northern Ireland, exploring a sample of what these two fantastic countries have to offer, enjoying the sights, sounds and tastes along the way.

I started at Dublin for the Stag-Do of one of my longest suffering friends, Andrew Connelly. Those of us from Devon flew from Exeter with Flybe after a kerfuffle with Ryanair. We then caught the convenient bus service from the airport directly into Dublin city centre. After dumping our bags at the hostel we met up with friends who flew from Bristol and London. A few pints in several bars, a quick burger and a first foray into the Temple Bar area (where more beers were drank, and proper Irish music was enjoyed) we were collectively finished for the night.

After grabbing breakfast and reconvening as a group, we headed to St Jame’s Gate to do the Guinness Storehouse Tour. A major tourist attraction in Dublin, the tour explores some of the local history behind the beer, as well as the temperature and conditions it is made in that make it unique.

The marketing history of Guinness was for me the most interesting part of the tour, as arguably Guinness has become a bigger brand than it is a beer – recognisable to far more than just those who drink it. With a free drinks token included as part of the tour giving you either the chance to try a paddle board of different Guinness products, the opportunity to learn to pour the perfect pint or to simply enjoy a free beverage at the rooftop bar and look at the views across Dublin, there is ample reward for time spent learning about this iconic drink. I opted for the paddle board, and am now in love with the Citra IPA!

The brand is arguably more recognisable than the beer!

After finishing the Guinness Tour we moved on to the Jameson Distillery. A shorter tour than the Guinness Storehouse, but impressive nonetheless, it was great to learn the differences between an Irish whiskey, a Scotch whisky and an American bourbon.

The iconic barrel-men carrying the casks of Jameson whiskey

While whiskey is still not my favourite drink, it is no longer one I truly dislike, and I appreciated the craft involved in making one of Ireland’s most famous exports. The tour was very interactive – and being in a larger group (14) was cheaper through a discounted ticket. Overall, it was very good craic!

After the Jameson tour we moved to one of the oldest bars in Dublin (the name escapes me) to enjoy some traditional Irish food – I chose the stew, and it was delicious. Heading back to the hostel we got ready for the evening. Being the main stag night out, we dressed Andrew as Prince for the night out. A bit left-field, but it was hilarious. Andrew was a great sport and stayed out until the end, before being violently sick after a shot train initiated by moi. A night hugging the toilet beckoned. He was, to be fair, utterly “van parcelled” a phrase that will no doubt haunt Mr. Connelly for the rest of his life – the final semi-decipherable gibberish of a man spiralling towards paralytic drunkeness!

With everyone feeling much worse for wear (Andrew in particular) we grabbed breakfast / lunch in an attempt to feel more human before planning to do something for the day. We wanted to go to Kilmainham Gaol, but unfortunately this is very much a book in advance tour and as we were visiting over the weekend we had no chance of jumping onto a one last minute. Being close to the General Post Office, we decided to hedge our bets there instead.

Panoramic shot of the Spire of Dublin – alternatively, real pillars have curves

The General Post Office, focal point for the 1916 Easter Rising, is an impressive place to visit regardless of any exhibition. With the Spire of Dublin outside, replacing the bombed Nelson Pillar, there are plenty of reminders of Ireland’s recent troubled past. Explosions and bullet marks still pock the facade.

Bullet holes from the rising

I found the tour somewhat more disappointing. A terrible hangover probably did not help things, but I want a few things from a museum exhibit – namely to see plenty of artefacts from the time and not to read placard after placard of information. I prefer the story to be told through other means. This was largely not the case, but there was a film about the rising that was almost worth the entry on its own. So not all a loss!

After a couple of hours at the exhibit we headed off to the Dublin Castle, via the Thin Lizzy statue for a few members of the crew who like the band. I must admit, initially I was impressed with the colours of the castle, but it has been used for state functions for so long now that the term castle does feel a stretch. Original purpose aside, there is very little in the way of military history for anyone interested in the Norman conquest of Ireland. 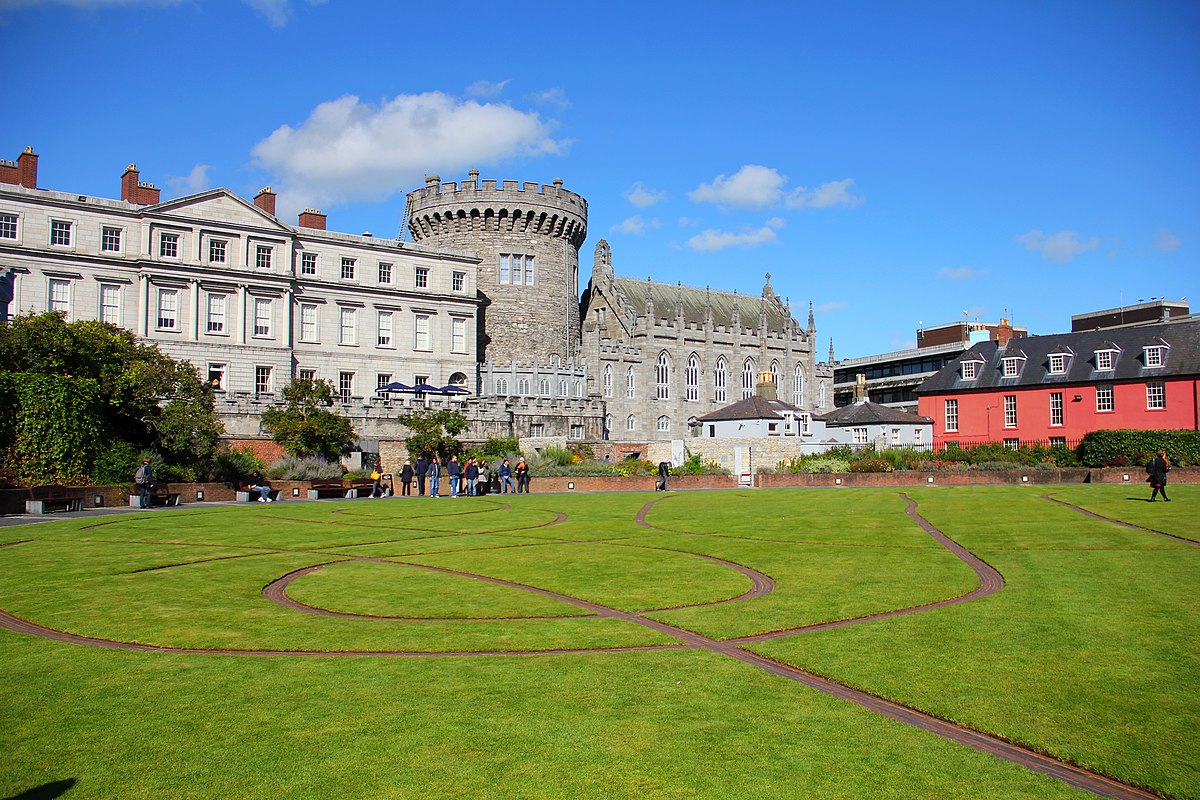 Not quite the castle I was expecting

With enough sightseeing and history for the day, the afternoon and night descended back into stag-do drinking and debauchery. It was our last full night together and last venture into the Temple Bar area as a group to enjoy the music, the beer and the amazing Irish atmosphere.

I’m not going to lie. I was struggling when I woke up on Monday morning. 3 nights of drinking followed by 2 early days sightseeing had definitely taken their toll. Still, I soldiered on. As a group we were leaving at different points throughout the day, so we met in the lobby of our hostel and checked out at 10:30. With the rough goal of “making the most” of our last day together in Dublin, we headed off to see Oscar Wilde sitting nonchalantly in Merrion square.

Spending more time taking photos for larger groups of tourists than spending time with Mr. Wilde ourselves, we decided to go and visit Trinity College and see the famous Book of Kells. As with all premier tourist attractions, there was a large queue to go and see the ancient book, even on a Monday. And, also like other premier tourist attractions such as the Mona Lisa, for me the exhibit did not live up to expectations. Much of the tour was largely text panel based, with a few other old prayer books available to look at. Upon arriving at the room with the two main gospels of the Book of Kells you are crowded around a small table, with no form of order to allow everyone to get close and have a look. After being jostled around for 5 mins or so, I resigned myself to not being able to view the book as intimately as I hoped and headed out into the Long Room of Trinity College library.

In all honesty this was the best part of the tour, towering arches of old wood just add to the the overall scholarly feel of the institution. Other artefacts are available to look at, including the oldest remaining Irish harp. After this you move into the gift shop where you are afforded a much better view of the Book of Kells – whether it be a tea towel or pencil eraser!

You’ll probably get a better view of the book in something like this!

After returning to the hostel, picking up my bag and bidding my friends adieu I got ready for my first solo night of my trip. Heading to my next hostel for my final night in Dublin, I checked in and dropped off my stuff before deciding to walk through St. Stephens Park and see the famine memorial before enjoying a picnic for my dinner.

I then took an evening walk along the River Liffey to end my last night in Dublin. Walking past the custom house to the Jeanie Johnston Tall / Famine ship I soaked up the sights and sounds of the docks, immersing myself in both the maritime heritage of the city and some of the larger injustices Dublin suffered under imperial rule. Tired, I decided to head back to the hostel and caught up on some well deserved sleep.

Evening setting in over the Liffey and Jeanie Johnston

I woke up and immediately headed to the Ambassador Theatre, where I had been reliably told by my friends heading out of the city that there was a dinosaur exhibition. Now I’m a fan of dinosaurs. A big fan. Exploring the various digs across the world and the makeup of life on Pangea was a perfect way for me to spend the couple of hours I needed to wait until my coach to Belfast. I do love a Dino!

After my thirst for dinosaurs was sated I headed to the Garden of Remembrance, just up the road from the theatre, to see one more landmark in the city. Dedicated to all who gave their lives to the cause of Irish Freedom, it seemed fitting to end my stay in this fantastic city by remembering the rich modern heritage the city has in its transition from part of the United Kingdom to independence.

Memorial to the cause of Irish freedom

It also seems equally fitting to end my blog post here, as I am conscious it was getting quite monstrous! I will return soon with my time in Belfast. Until then, I leave you with any references below.

Dublin – I will be seeing you again!

I used the following sources to either write this post or plan my stay: