Leaving slightly later than anticipated due to a missed alarm clock (typical) we started our long road trip to the Grand Canyon. First stop – Waffle House; my first visit to the American Breakfast institution. 2 hash browns smothered in chilli and cheese followed by a giant waffle later and we were on our way. Heading west to Utah we aimed to reach Moab, Utah in the early afternoon. 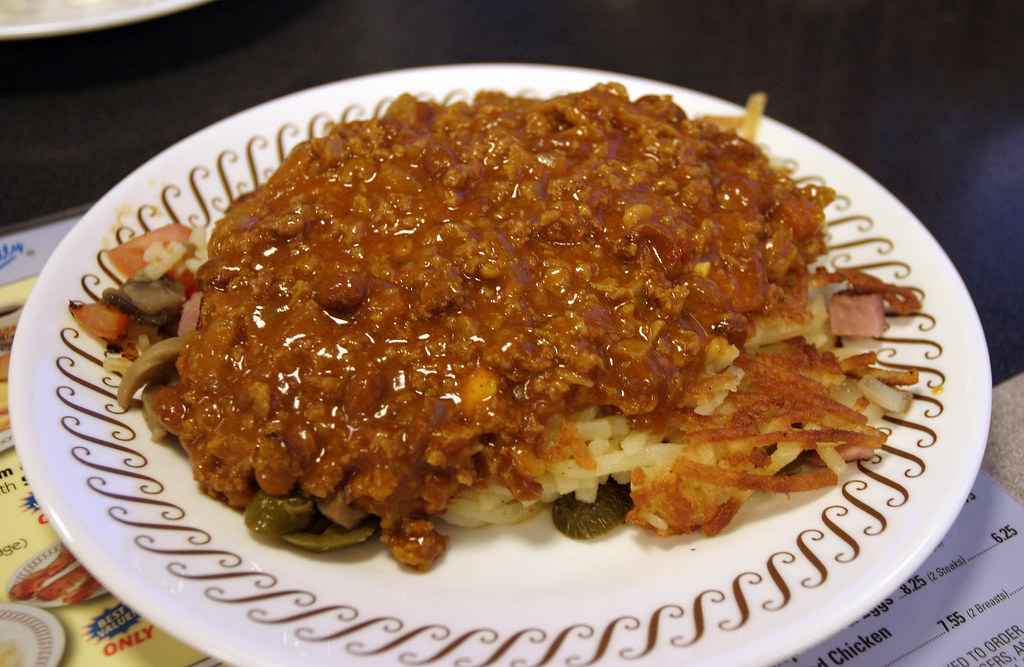 Tastes better than it looks!

There is something about driving the vast distances of the USA that is incomprehensible to someone like me in England. 6 hours later we had arrived in our destination. For me that was a distance that would have covered the nearly the entire length of my country. Yet I have been reliably informed that Utah is local enough to Denver that they support the same NFL team. Madness.

Presumably some of this crowd are Utahns

Different concepts of distance aside, Emily and I had two things we wanted to see in Moab, the first being the Giants. Okay. This was something that I specifically wanted to see. Or rather, the man child in me wanted to see. A park in the desert with giant life-size statue replicas of dinosaurs from the local area and Morrison Formation. To me it seemed almost purpose built, an absolute not miss.

Utahraptor – eponymous dinosaur of the state

$34 dollars and 20 minutes later we were finished. Emily will probably tell you it could have been missed. I’m still not so sure. It’s not every day you get to cop a feel of a T-Rex, after all.

The real reason to visit Moab however is of course the Arches National Park. Driving through Utah you will see references to the Arches everywhere – even the number plates proudly display Delicate Arch. $30 entrance per vehicle means you can drive the winding cliff road into the park, which is remarkable in itself. Nature really has gone all out – phallic rocks galore tower out of the red desert.

Impressive as (father?) nature was, we aimed to do two hikes while in the park – the first being a loop covering three of the arches; Tunnel, Pine Tree and Landscape. The first two were of course less impressive, but the midway point of the loop gave an amazing view of Landscape Arch, one of the iconic arches in the park. Unfortunately these days you cannot hike to right below the impressive structure due to the fragility of the ‘roof’ – not so long ago many tons of rocks collapsed and still litter the valley now. An amazing sight nonetheless, we headed back to the trailhead, thinking we knew what Moab was all about.

Landscape arch – borrowed from wikipedia as the angle of the sun gave me no photography options!

We were wrong. Hike number two was a there and back to Delicate Arch. THE arch of arches. Sometimes in life expectations are greater than reality. Very occasionally though, a situation completely surpasses all expectations. This hike was one such moment. The hike itself was beautiful – starting in desert, you pass Native American petroglyphs before climbing for an hour up and along a rock slab, steadily climbing out of the canyon. The beauty of nature, intertwined with the heritage of a people far more in tune with their surroundings than I could ever hope to be, made this ascent memorable enough.

The petroglyphs were an amazing sight

But rounding the final corner, the destination was awesome. In the true meaning of the word. Awe inspiring. I expected Delicate Arch to be maybe 3 times the height of me. It was massive. Around 10 times as tall as me, it towers a massive 60ft over everything around. I wasn’t the only one amazed by the spectacle – Emily was stunned, and the general feeling of other hikers among us was the same. Delicate Arch is a special place. Utah’s recognisable licence plate is something that anyone who loves the outdoors should strive to visit.

Satisfied, we hiked back to the car and headed out of the park and to our Airbnb for the night in Monticello, as it was closer to our destination for the next day. After a restful night and another breakfast burrito at the Peace Tree Juice Café (nice, but not up to Fort Collins standards) we headed off to Arizona. Before crossing the state border we laughed at approaching a place named Mexican Hat, before stopping to take in the fantastically sombrero-shaped local landmark. It was a quick reminder that when on a road trip there is always adventure along the way to your next destination. In this case… the Grand Canyon!

It does, to be fair, look like a Mexican Hat